How to Build Powerful Strategies Using the Ansoff Matrix

Lynn
Lynn's diverse perspectives on business stem from her extensive experience as a management consultant - her role as a beloved wife, mother and grandmother adds further depth to her insights.
Find a Consultant

It is a valuable strategic planning tool for management, marketing and especially for innovation consultants. Because, it allows for free-flowing discussion and brainstorming around growth options for companies.

The Harvard Business Review published the matrix in 1957 as part of Igor Ansoff’s research called Strategies for Diversification.

In his paper, Ansoff refers to a survey of USA corporations undertaken between 1909 and 1948. It concludes with the statement: “There is no reason to believe that those now at the top will stay there except as they keep abreast in the race of innovation and competition."

Ansoff would not have anticipated today’s rate of innovation and competition, but that statement is as true now as it was then.

Much of what Ansoff said decades ago remains relevant today – I will be using much of it in this article, especially in trying to clarify the Ansoff Matrix with examples.

What is the Ansoff Matrix?

Ansoff described the matrix as such:

“A method for measuring the profit potential of alternative product-market strategies, starting with a forecast of trends and contingencies and then working towards company needs and long-run objectives.”

Some of the elements in this description are worth noting.

If you are like me, algebraic equations make your eyes cross. However, it’s worth reading the original Ansoff thesis, together with his mathematical calculations (remember, he was both a mathematician and business manager – together regarded as the father of strategic management).

“Here is a method for measuring the profit potential of alternative product-market strategies, starting with a forecast of trends and contingencies and then working toward company needs and long-run objectives.” H. Igor Ansoff, 1957

Ansoff was careful to define what he meant by product and market. He used the aeroplane manufacturing industry as an example.

His definitions slightly shift our understanding of what he meant by “new.” There are subtleties here that consultants who use the matrix may want to consider.

In a manufacturing company, product refers to:

Any modification to these characteristics could constitute a new product. For example, you may sell a concentrated fruit powder to mix with water. If you add water and sell it in small bottles as a beverage, this can be a new product.

Today, many products are virtual – they are services or experiences. Or they are hybrid, combining both physical and virtual. For example, a software product that used to be available on a CD to be loaded onto your computer is now available in digital format and is sold by subscription.

Product today also refers to the complete product experience. This is a complex issue outside of the ambit of this article. But modifying the characteristics of the experience may also be considered as developing a “new” product.

The classic definition of a company’s market is the specific group of people your product or service aims at.

Ansoff did not describe the market in terms of customers. Instead, he referred to the job which the product is intended to perform.

So, in his aeroplane example, he described the market for the Lockheed Aircraft Corporation as

A “new” product may be an adaptation of the current one for a different purpose. For example, the Lockheed Corporation adapting its service to “commercial air transportation of cargo.”

Obviously, this also means that there will be different target populations. Reaching them is a marketing function.

A product-market strategy is a relationship between a product line and the various purposes for which it can be used. Moreover, each purpose represents a different market.

The Four Quadrants Of The Ansoff Matrix

The matrix is a strategy framework used to assess growth strategies and the associated risk of each one.

The two primary ways to grow are through varying

Four options arise from this: 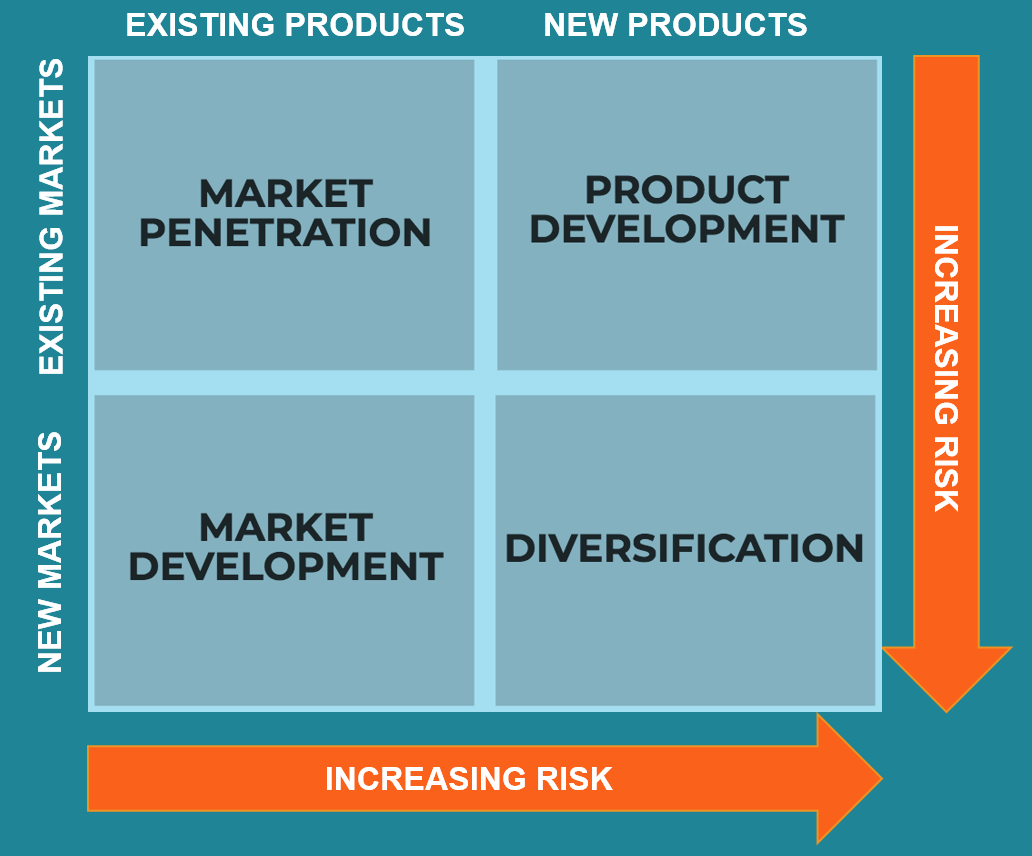 Ansoff suggests that companies should be following several paths simultaneously, constantly weighing up the advantages of the four strategic options and combining them in different ways.

Market penetration, market development, and product development will generally use the same technical, financial, and marketing resources used for the original product line. However, companies should think very carefully before adding diversification to their product strategy. It typically needs new skills, techniques and business models.

It might be helpful to consider the level of innovation you want in the diversification strategy. Innovation consultants may find the Innovation Ambition Matrix helpful. It is a refinement of the Ansoff matrix.

The Ansoff Matrix With Examples Of Diversification Failures and Successes

Perhaps the best advice to consultants and companies who want to apply the diversification strategy is to learn from the stories of failures and successes among the world’s top companies.

Even if a company has millions to invest, some diversification and expensive product development strategies just don’t get off the ground.

In 2011, GE set out to become a top-ten software company. The move from heavy machinery to cloud-based software did not make economic sense and was too far from the company’s core competencies.

In 2016, Nike decided to move into a new market – the fitness sector – with a new product, the wearable Fuelband. Despite enormous investment into this project, it was shut down after just three years. Again, the new market was too far from Nike’s core competencies, and they didn’t communicate effectively with their new customers.

The all-new recipe for Coke was launched in 1985, but the original had to be returned to the shelves. Although Coca Cola launched new variants, but not to replace the original.

Cosmopolitan Magazine launched a yoghurt product. It was more expensive but was meant to be “sophisticated and desirable.” But, customers couldn’t see the connection, and it failed after a year.

Proctor and Gamble launched its yogurt-based shampoo in 1979, with names like Fragrance of Kefir and Sound of Sour Cream. It may have had more success today, but it was way ahead of its time – especially as some people drank it because they thought it was edible.

You can read more about why digital strategies fail or succeed in the blog section.

Diversification can be risky, but it is also exciting. It opens new revenue streams from markets that the company did not previously access.

There are many others, including Amazon, Netflix, and Tesla, whose stories are well known. Mostly, the secrets of their success have included

For example, Fujifilm is an inspiring example of a company using its underlying assets differently to break into adjacent markets. It also used its knowledge of photosensitivity, UVA, anti-oxidation, and other technologies from its analogue photography business to break into the beauty business, medical systems such as X-Ray machines, regenerative medicine, and pharmaceuticals.