What is the Technology Adoption Curve, and How Should You Use It? 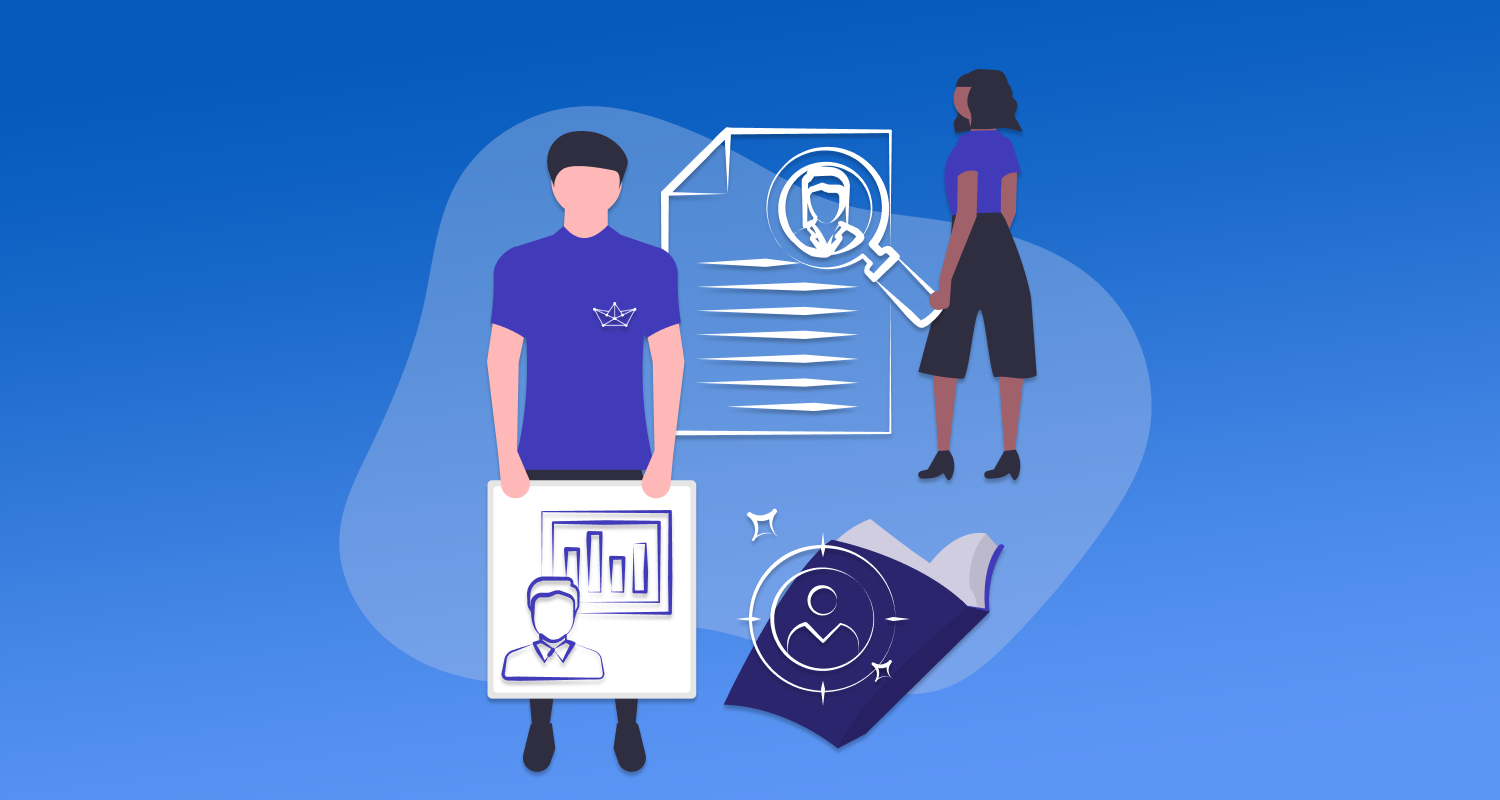 Lynn
Lynn's diverse perspectives on business stem from her extensive experience as a management consultant - her role as a beloved wife, mother and grandmother adds further depth to her insights.
Find a Consultant

Technology adoption has never been faster.

However, the principles associated with the technology adoption lifecycle may be the same, the time lens through which you view it has altered dramatically.

If you are involved in innovation consulting, you know the challenges in getting even the best ideas implemented in client organizations. But perhaps, it is a good idea to look at them again, taking what we now so glibly call the post-Covid “new normal” into account.

The New Normal for Technology Adoption

According to McKinsey research, “Covid-19 has pushed companies over the technology tipping point – and transformed business forever.”

Moreover, It has significant implications for management and digital consultants – and for innovation consultants.

The Speed of Adoption Is Extraordinary

The speed at which companies executed changes in response to the pandemic is remarkable.

Here are just three of them, where respondents to the McKinsey survey reported actual vs. expected number of days to execution:

Table 1: Time required to respond to or implement changes - expected vs. actual

The first statistic – the increased use of remote work - is a good indicator for consultants working as freelancers or using online consulting platforms. Chances of being found online and employed are significantly better than they were even a year ago.

Technology adoption in operations and business decision-making is just as surprising. However, what might have taken nearly two years to implement in the past is now happening in less than a month.

What Does This Mean For Innovation Consulting?

In conclusion, we can say that economic imperative and business survival are massive drivers of technology adoption.

A second conclusion is that the technology must meet the business need. This is why we saw digital adoption for e-commerce and logistics solutions and the rapid conversion to online meeting tools like Zoom, Google Meet, and Microsoft Teams.

Whether the speed of adoption will continue at the current rate or not remains to be seen. However, it is unlikely to go back to the old ponderous pace. So, consultants must consider the methodologies they use.

Agile sprints will probably work well. They will break down the project into small deliverables and deliver a workable product every month or two. They will work together towards the “end” result. However, organizations cannot wait for that distant outcome.

Consultants will also have to be more aware of the “people” side of technology implementation. This basically includes being alert to what the technology adoption lifecycle describes.

Let’s start with some definitions.

Technology adoption refers to the acceptance, integration and use of new technology in a particular environment.

Typically, the Steps included are:

Basically, The technology adoption lifecycle describes the personas of adopters at each stage of the acceptance of new technology. This is also referred to as the demographic and psychological characteristics of adopters.

The personas were initially described in 1962 by Everett Rogers in his book “Diffusion of Innovations,” where he explained how, why, and at what rate new ideas and technology spread.

Adopters are characterized according to their innovativeness, i.e., the degree to which an individual adopts a new idea.

Identifying where your key contact people fit on the technology adoptions lifecycle is a critical element of innovation consulting.

However, Rogers went beyond just describing the adopters.

Moreover, He proposed the main elements that influence the spread of a new idea:

Those involved in innovation consulting should probably consider both lists. Moreover, For any innovation to be sustainable, there must be a critical mass of broad adoption. But this depends on the innovation itself meeting a genuine business need and being communicated effectively.

It used to be that a fair amount of time had to be allowed for acceptance to grow. However, the pandemic has shown that this may be a fallacy – organizations will change according to the urgency of the need.

The Role of Adopter Categories in Technology Innovation

Let’s look at the five adopter categories in more detail and consider their impact on innovation consulting.

The percentage of people in each category, according to Rogers' bell curve, is shown below. 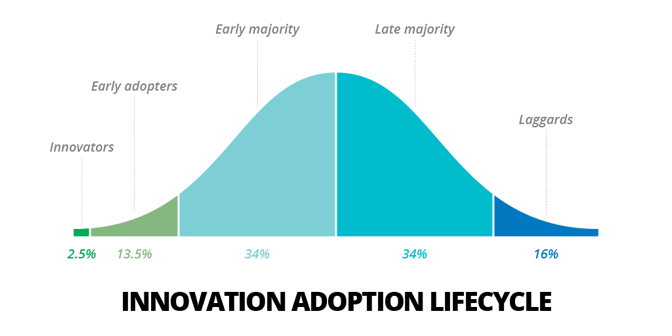 It’s essential to note that the people likely to embrace technological change quickly – the innovators and early adopters – make up only 16 percent of the total to be convinced.

It's also important to recognize that people may accept a new innovation in their personal lives - for example, an upgrade to smart phones - but resist a new technology at work.

Innovators (2.5% of the group) are the first individuals to try new innovations and tend to enjoy the risk associated with them. Moreover, they are also willing to accept setbacks if new ideas prove to be unsuccessful. They may be mavericks and outside of mainstream social or work groupings.

Early adopters (13.5%) are more integrated into the social system and tend to be the opinion leaders in their social or work circles. Basically, people seek out their advice and information about innovation.

This is an important group for consultants and change agents. Moreover, they should actively look for early adopters to help them introduce new technologies.

They are quite often in senior positions in the company hierarchy or are building their reputations. Generally, they want to do what is best for the organization.

Early majority adopters (34%) will take on new ideas just before the average member. They tend not to be in top leadership positions, although they are willing followers and interact with their peers, thus passing on information about innovations.

Typically, they are middle and line managers, waiting to see how a new technology or new processes are faring and whether higher-ups are adopting it.

Late majority (34%) members tend to be skeptics. Their acceptance may be in response only to economic necessity or increasing social pressure. They are cautious, risk averse, and reluctant to adopt until most in their social system have done so. Even if they know the utility of the innovation, there must be intense pressure from peers to adopt.

Moreover, late adopters are often older employees or those that have been with the organization for a long time.

Laggards (16%) are traditionalists and the last to adopt an innovation. They focus on the past, wanting decisions to be made in terms of previous generations. They are as suspicious of innovators and change agents as they are of the innovations themselves. Quite often, by the time they accept innovation, it has become obsolete and replaced by something newer.

They also tend to be older and use new technology only if there is no other way to get their job done, or they will be penalized for not using it.

If the distribution frequency is correct, you should be aware that at least 50% of your target population may be actively resisting the technology you are introducing.

This is where you might want to take note of an interesting theory put forward by Geoffrey Moore in his book “Crossing the Chasm.”

According to Moore, there is a critical stage in the technology adoption lifecycle. Basically, this is where new technology is being used by early adopters, but not yet by the early majority.

There is a wide “chasm” in thinking between these groups. Innovation projects tend to fail if they cannot bridge this chasm and have the early majority pick up the ideas.

Moreover, your primary contact person or project leader may be excited (an Innovator) and the senior management team enthusiastic (early adopters). However, the masses don’t want something new. They want something that works, that makes their lives easier, that many others are using.

The challenge for consultants is, therefore, to reach the early majority group. You will get traction if you make what you are proposing appealing to them. Be aware that they will be open to useful solutions but will be on the lookout for fads and hype.

This stage of the life cycle is particularly tricky for innovation implementation, as it often coincides with what some have described as the “Trough of Disillusionment:”

Basically, A customized approach for user adoption and product adoption for a new product will pay dividends.

Basically, the technology adoption lifecycle is a sociological model that describes the personas of the employees who will respond to the new technology you are proposing.

Understanding these defined adopter groups and adjusting your adoption process to accommodate them can differentiate between successful innovation consulting and failure.

Moreover, technology adoption has speeded up in response to the Covid pandemic, and innovation consultants will have to adapt their methodologies to match this speed.

However, understanding how people react to technology adoption remains an essential requirement for implementation success.